Village Politics and the Mafia in Sicily (2nd edition)

Sicily has long been seen as an island whose people are plagued by governmental failings and general social disintegration, as well as the home of the mafia. In Village Politics and the Mafia in Sicily Filippo Sabetti examines more than two hundred years of political economy to show that many of Sicily's problems are of more recent origin. They are not due to a lack of civic tradition but to a structure of basic social institutions that impeded rather than facilitated self-governance.

He suggests that the mafia emerged only in some parts of Sicily and was never a single overarching criminal organization. It arose, in fact, from a self-help tradition that eventually became corrupted and ultimately a burden on most villagers - land workers and proprietors alike. The local antimafia forces also became a drain on village life and by the middle of the 1950s both the mafia and the antimafia, far from destroying one another, had vanquished themselves. The first study to extend rational choice institutionalism to Italian history and politics, Village Politics and the Mafia in Sicily offers an in-depth analysis of the impact of the abolition of feudalism in 1812, the unification of Italy in 1860, and subsequent regime changes on village politics in Sicily. Sabetti details the emergence, evolution, and collapse of a local mafia and antimafia in a historical, "before-after," perspective. Refocusing the study of village politics and the mafia, he also suggests what can happen when those acting for the state regard ordinary people as passive voices in the game of life. 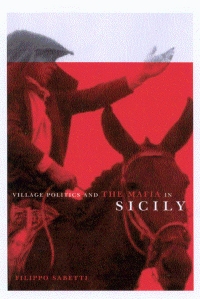