Reparation for Victims of Crimes against Humanity

The healing role of reparation

Each year, countless victims fall prey to crimes against humanity. These are among the worst crimes known to humans and include widespread occurrences of systematic murder, torture, rape, disappearances, forced deportation and political persecution. Crimes against humanity constitute an attack on human dignity and as such they violate the human rights of the victim, as well as the laws of humanity.

In recent years, following the creation of the International Criminal Court, there has been a growing interest in the prosecution of offenders and in particular, in reparation following crimes against humanity. While such measures are meant to provide justice for victims, victims are often forgotten or lost in legal debates about what constitutes reparation and who is eligible to receive it.

This book reaches beyond the boundaries of law and psychology and takes a multidisciplinary approach to the question of reparation for victims of crimes against humanity. Law does not take place in a vacuum and it is important to consider the impact of the law on the psychology of the victim, as well as the legal principles themselves. Herein lies the originality of this book, which bridges the gap between psychology, victimology, criminology and law and will be of key interest to academics and students engaged in the study of these areas. 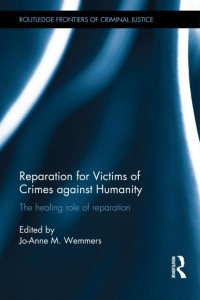